Made my first ”race” on April 29. GP Mutschellen was a 1,3 km hill climb that was done 4 times. I managed to get both up and back all 4, although I lost both some oil and a couple of screws in the process.

Only the evening before had I managed to start the bike and make it run half way reasonable, having fitted a single Mikuni carburettor instead of the two 38mm Gardners on which I could not make it run well enough.  The next morning, me and my “chief race engineer” Klaus Knöpfel got the van loaded and headed off to “Mutschellen” – about an hour´s drive. Plenty of vintage racing cars and motorcycles, friendly people, several thousand spectators and fantastic weather.

Bruno Kneubeuhler, who was second in the 125 cc Road Racing World Championships in 1983, started after me, and in spite of overtaking being forbidden, he blasted past me on the inside in the first and only hair needle left hander. Bruno, 72 years old, was on a 4 cylinder Honda. As we got down again I walked up to him and told him that I did not mind him overtaking me – but he could have taken it a bit easier after that to show how to negotiate the rest of the track. He said that unfortunately he could not take it easy on the Honda –“the darned thing needs 20.000 rpm to run properly”.

Bottom line is, the bike felt a bit “mushy” in the bends – maybe too soft rear suspension, oil was leaking from various places, carburetion was not perfect, I had a hard time getting my left foot up on the foot peg and my knees could not be tucked in behind the fairing.

The bike is back in the workshop now and is undergoing some “optimizations”. A new rubber mounted oil tank and a new set of oil hoses, an automatic non-return valve to stop oil from flowing from the tank, past the oil pump gears and into the crancase – should take care of all the oil issues. Soft suspension can easily be taken care of by increasing the spring pressure ( losing weight is not an option that I will/can hope for ) – although that would have taken care of the foot peg issue as well. The fairing will be cut off a bit and then the knees will be possible to tuck in behind it. Leaves us with carburation. The Gardner people insist that they should work so I am raising the float level per their intructions and then we shall see. As a plan B I have acquired a set of 34 mm Amal Mk II carbs and will fabricate new inlet manifolds to suit. Let us see which one solution will work better. I am determined to use a twin carb set-up in any case.

Going uphill. Rear suspensions seems already here to be “depressed” or compressed. Had just managed to get my left foot up on the foot peg. Left knee is outside the fairing. 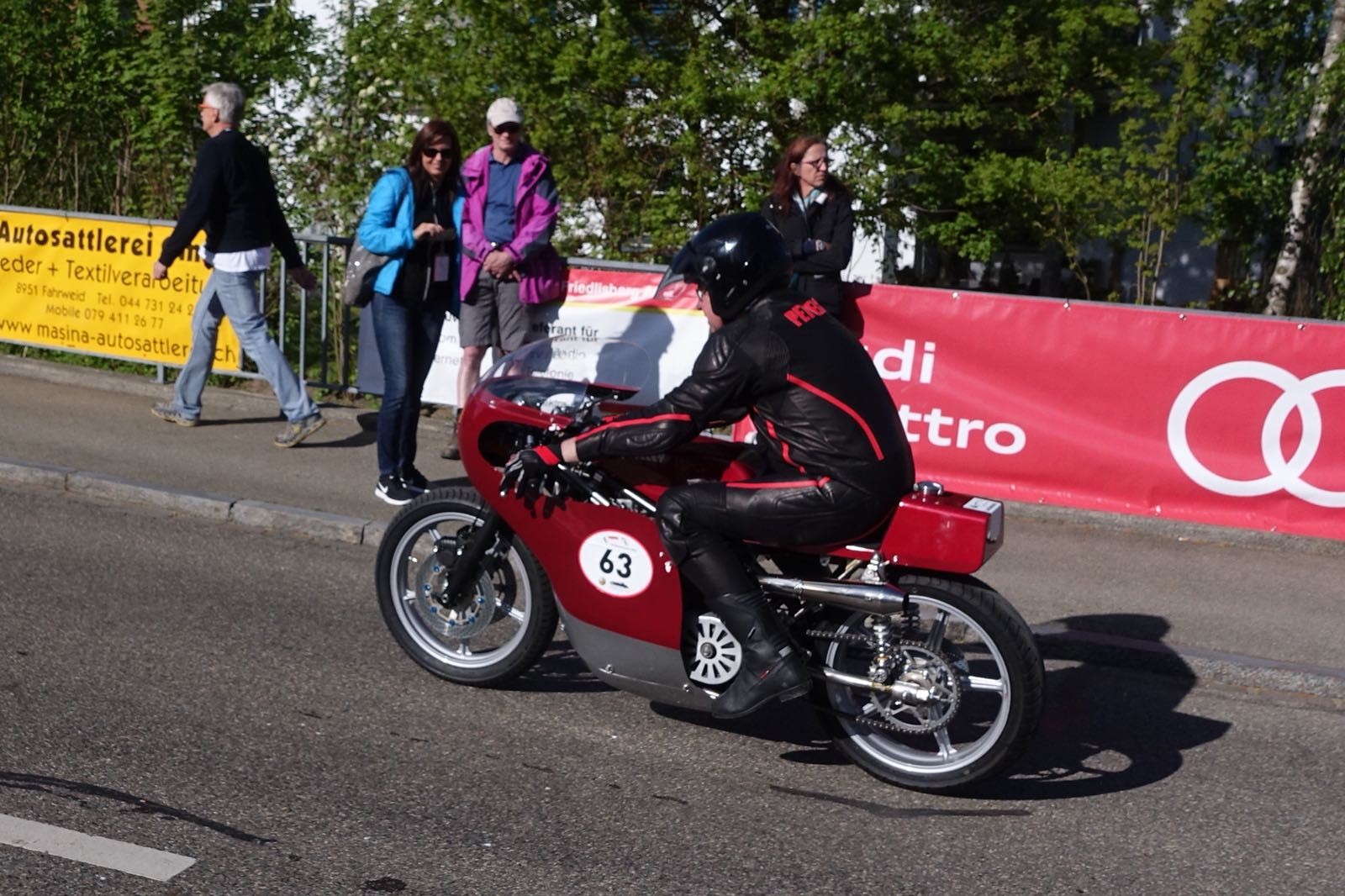 Below a shot from the front. New oil tank hanging in 4 rubber mounts. Bottom left is the tank outlet to the engine. Upper right connector comes from the engine, via the oil filter. The idea is that here the hot oils sprays on the top of the oil in the tank and as it cools off it sinks to the bottom and is picked up again to go into the engine. In reality this will be quite different I guess but it is at least a try to feed the engine with a bit cooled of oil. The connector on the top left is the crankcase ventilation. This continues with a tube bent 90 degrees upwards inside the tank – the idea here being that no oil shall return from the tank to the crankcase breather. On the top of the tank you can see another 90 degree stud. This is a connection from this tank so that it can ventilate into the old tank/seat. 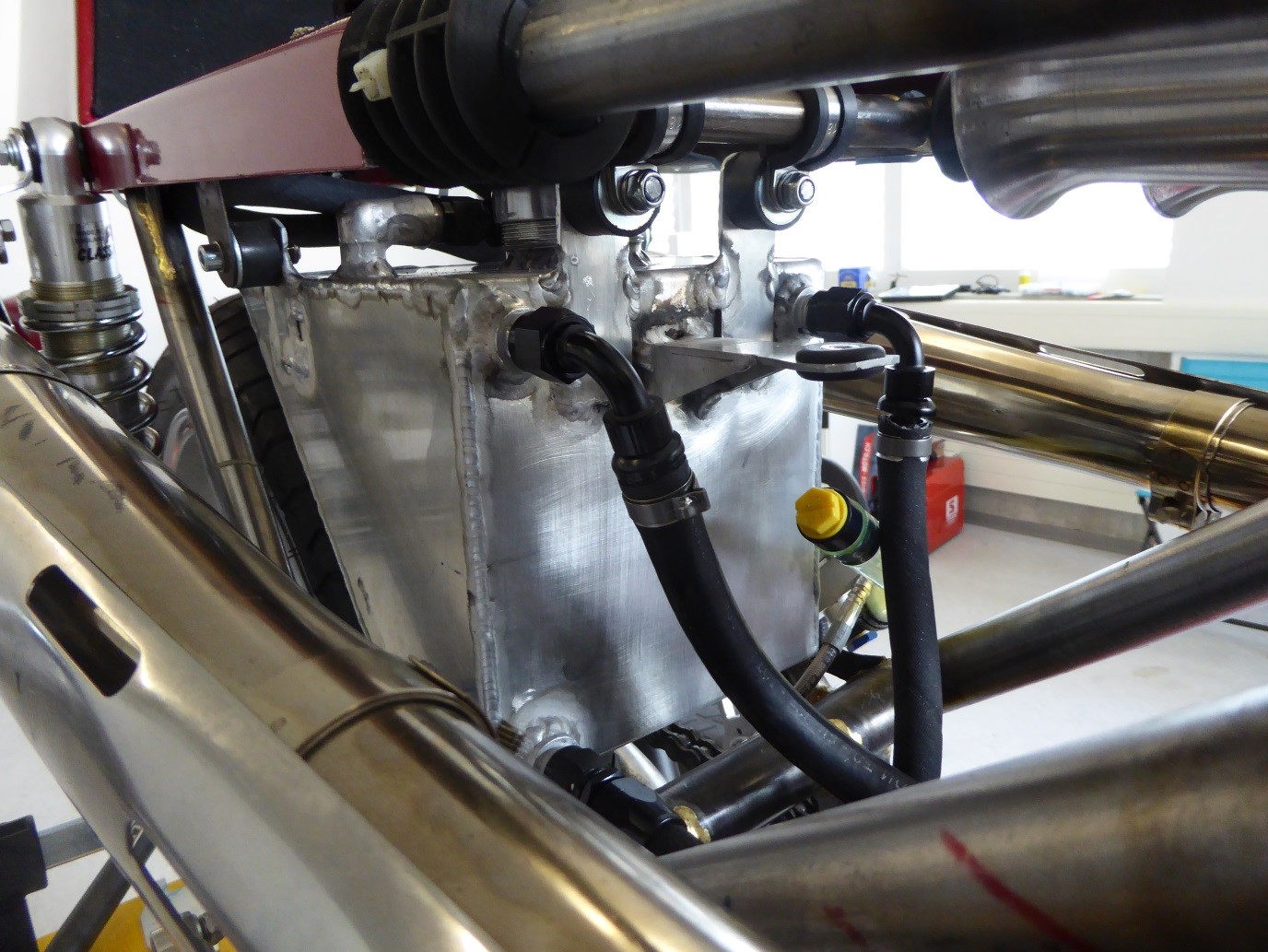 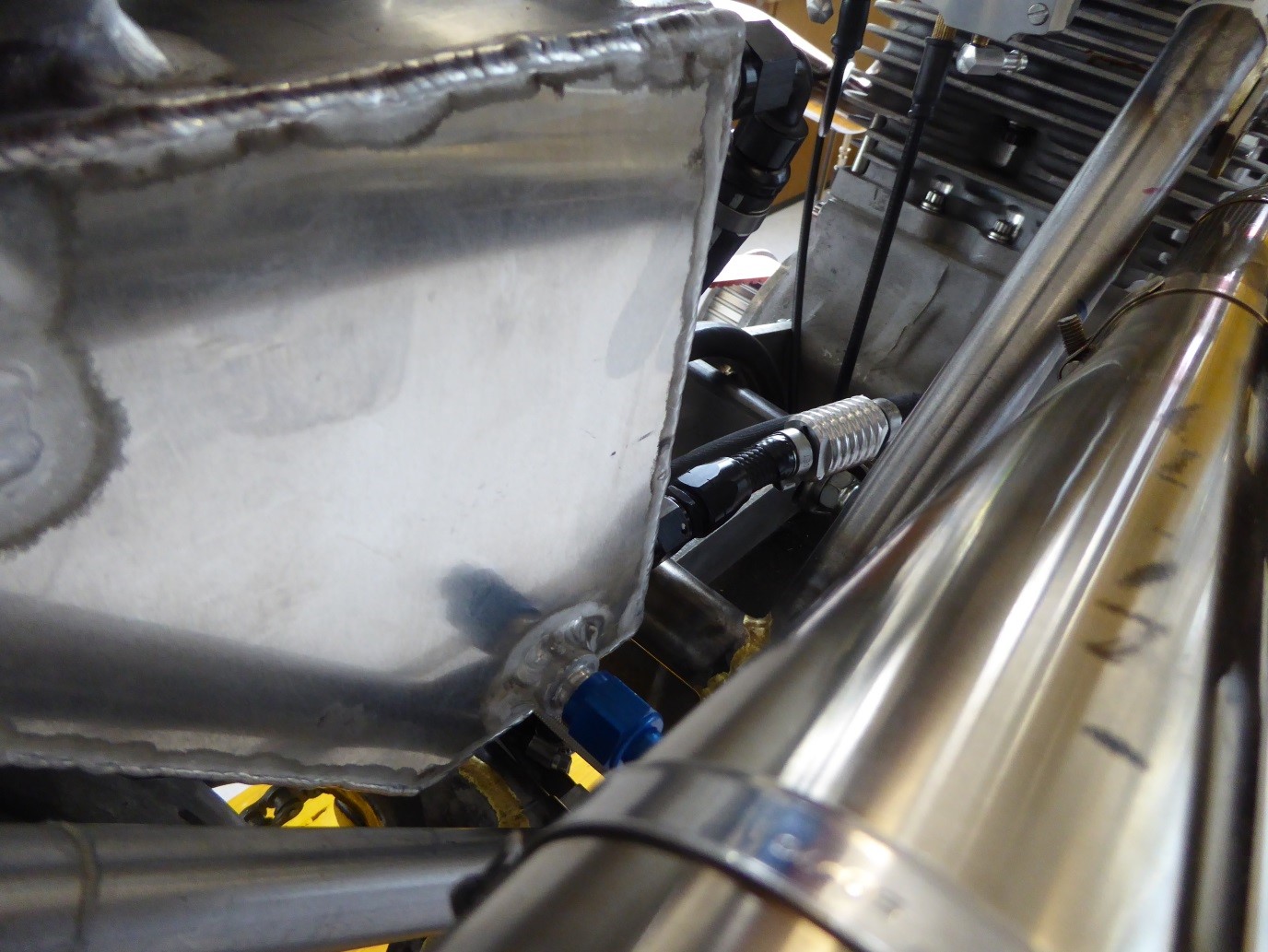 Another view from the front. The bracket between the oil connectors is where the Gardner Float Chamber will be mounted. 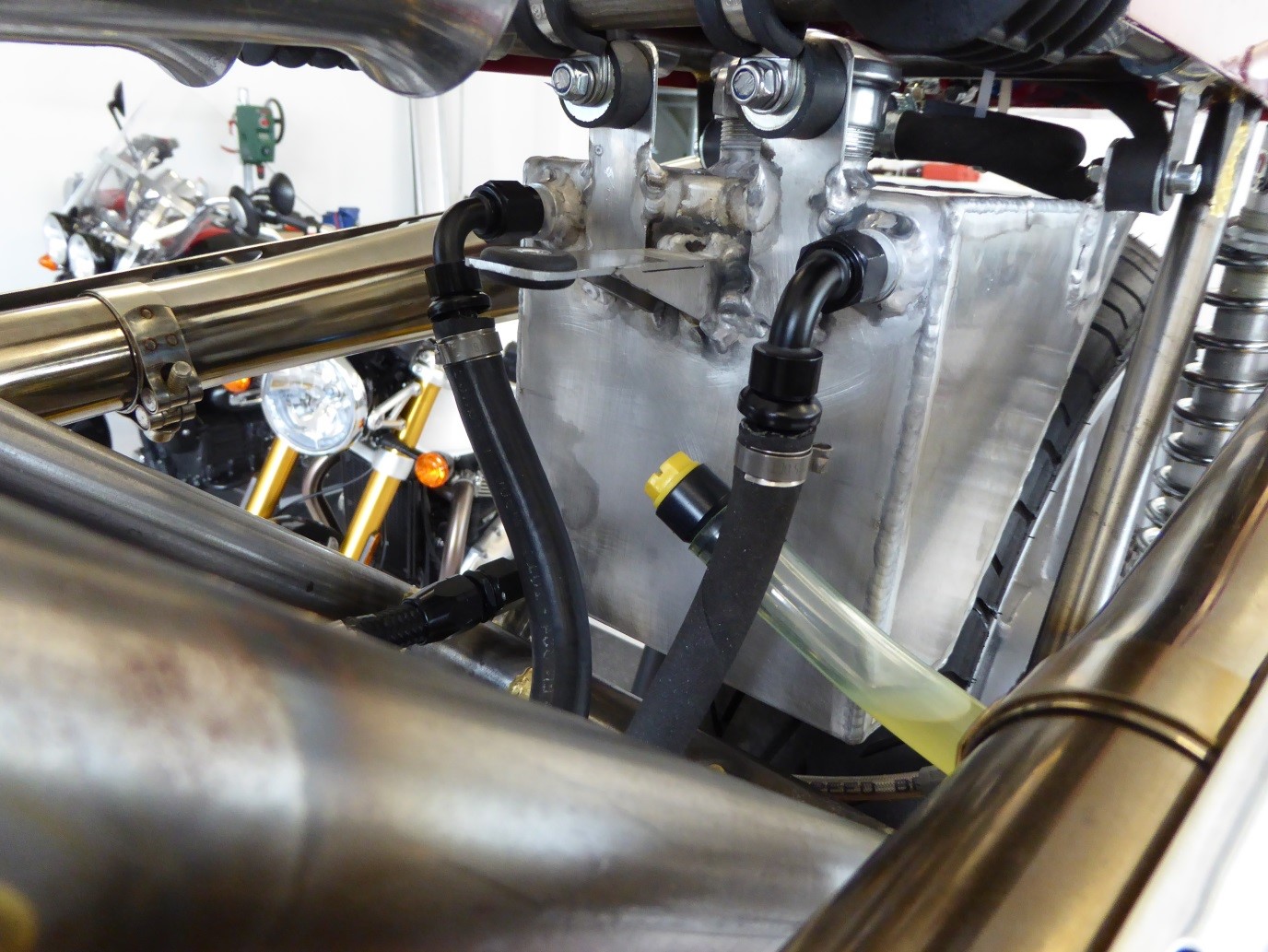 The Gardner carbs are back again for a final attempt. Last time on Marcel Gerhardt´s test bench we could barely only start the engine. Once running and on higher RMP´s we could keep it alive, but nowhere near anything like idle speed. I am raising the float chamber per instructions and then we will see. 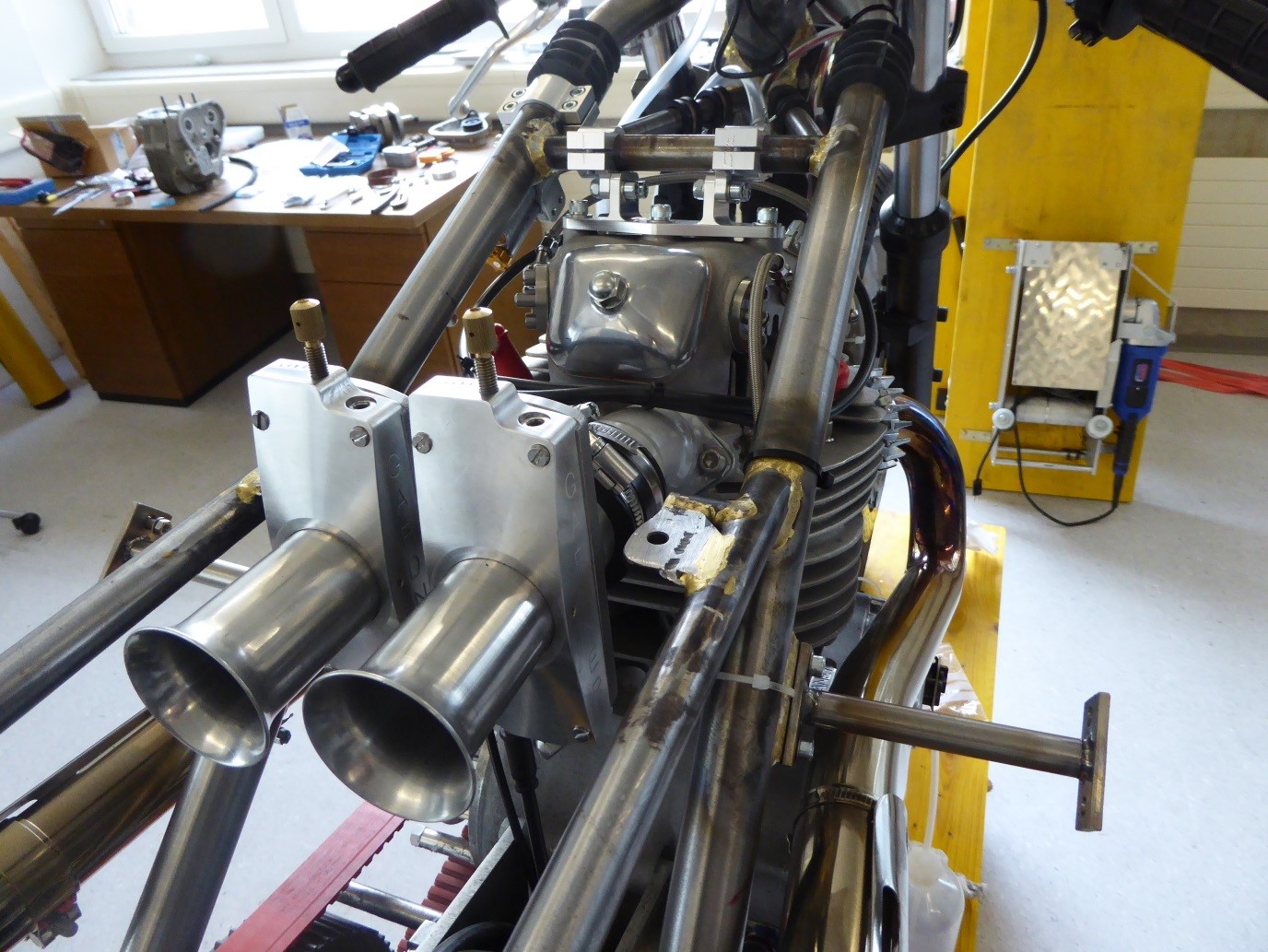 If they do not perform they will be replaced by these 34 mm Amal MkII units. Will not give as much maximum power but that is something I need to live with then. 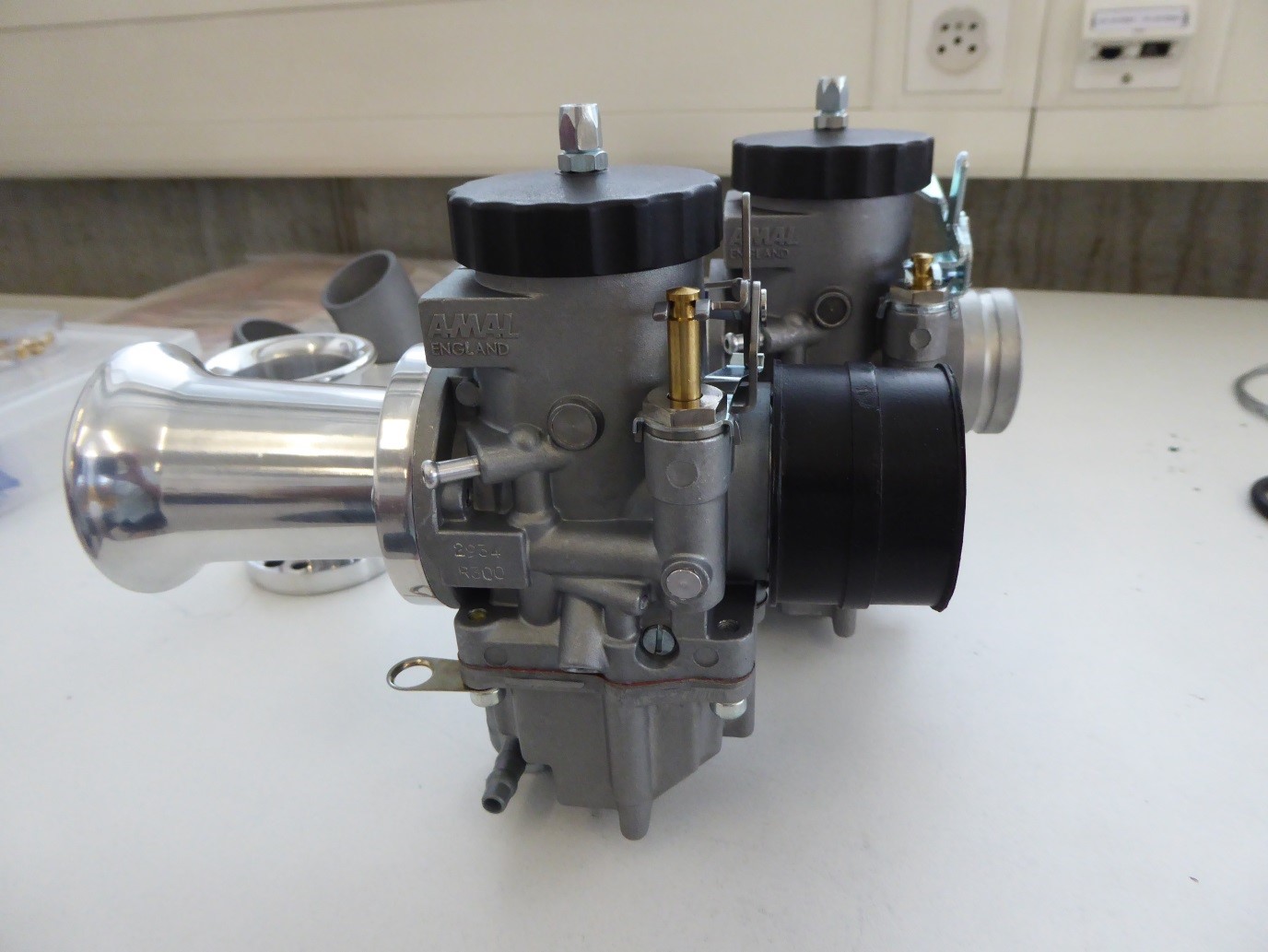