Jim Comstock has finished his work on my cylinder head. He has repeated what I once did to my first Norton Commando engine: re-angled the holes for the valve guides so that he could fit 3 mm bigger inlet valves. Then he has opened up the inlet tracts to a 33mm diameter, ported the tracts (which means given them an ideal shape and size (within the limits given by the existing form and wall thicknesses) to maximize the flow of the air/fuel mixture though the ports = maximum power and torque. I am not privy to how Jim does this but as he is regarded as the best in this genre for Norton engines I am just going to believe that he has going to give me the best there is to have. Fedex  screwed up the pickup so I saw myself spending another weekend without the head and what is then better to do than to give the rocker arms some attention.

Below is one of the inlet rocker arms after I have spent an hour or so grinding away on it with grinding stones and emery cloth. The object of this exercise is to remove excess material and so lighten the rocker as much as one dares, without weakening the rocker. I have therefore set out to remove material around the two eyes where the valve play adjuster screw respectively the push rod ball end are located. As these are located furthest away from the rocker centreline this is also where the lightening will be most effective. In addition to this I have ground away material from other places where it obviously fills no function but is merely leftovers from the forging process.  Jim says his valve springs will handle the rocker arms without lightening them but I can just not put them in the engine in their raw form. I reckon I will be able to remove 10 grams = 10% which is not bad. Think about it this way: The valve spring has the close the inlet valve, including the rocker arm, pushrod and cam follower about 4000 times per minute ( 65 times per second ) so obviously the less weight these components have, the less the valve spring needs to work. Below the result after about a hour´s work. As you can see there is still material left around the left eye that can be removed. Sunday work instead of going to church.

Below a very poor shot that shows the polished rocker arm left and an original right. You can see there is a lot of unnecessary meat around the adjuster hole. Will be a pleasure to grind away on. 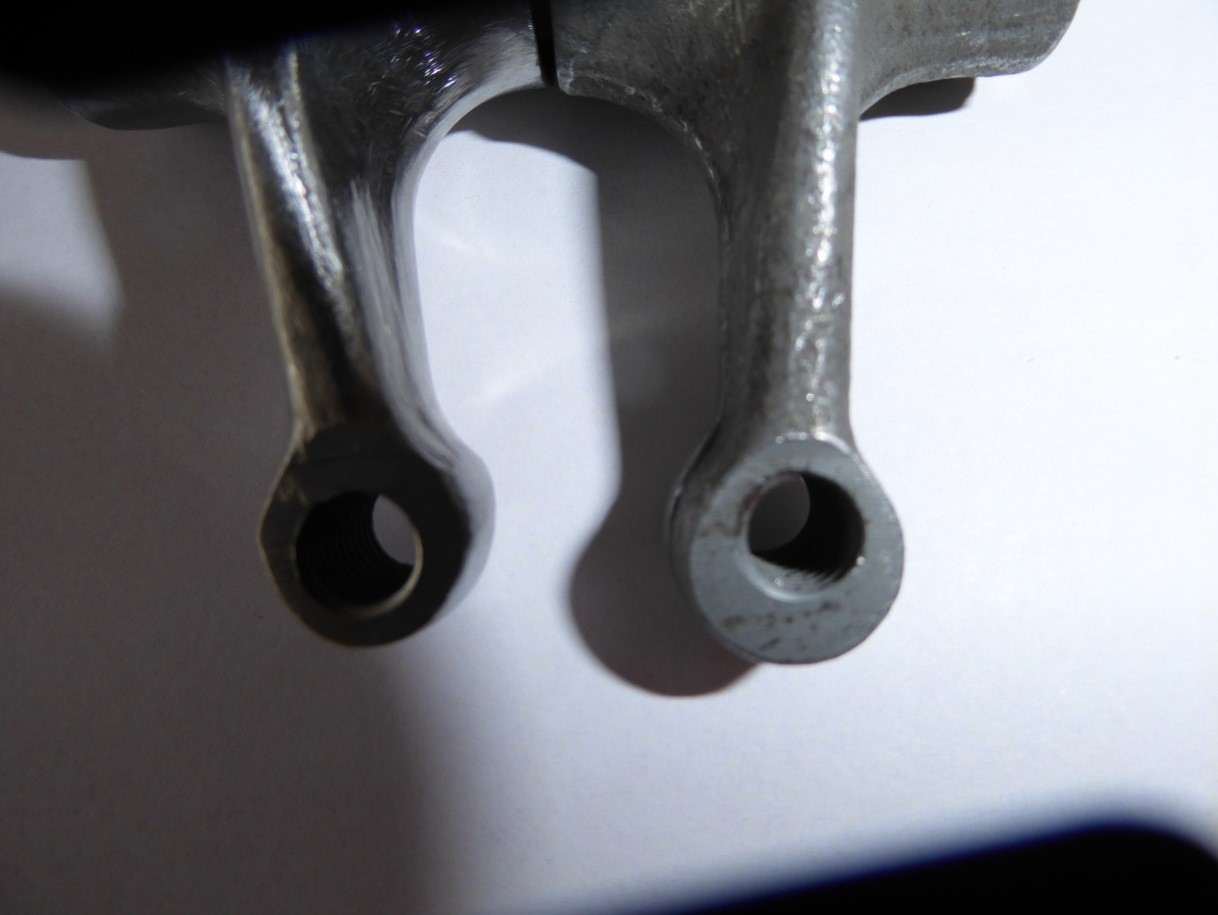 6 weeks have passed and not much has been done, at least not to the naked eye.

Below is what the machine looked like as I left it tonight. Not too much missing. I have to deal with 2 losers. One is the guy in NY that was supposed to make my exhaust. He keeps giving me excuses so I will make them locally. Have found I guy that seems to be able bend tubes beautifully, so who needs a New Yorker??  Managed to buy NGK spark plugs locally but had to go to Ebay and Amazon to get the ignition cables and spark plug caps. Still, one of them screwed up and sent me straight caps instead of the 90 degree variety. 2 weeks delay for nothing.

Today I have hooked up the float chamber with the carburettors. As you can see from the pictures, the Gardner carbs do not have an integral float chamber – meaning of course you have to fit an external unit. I did get one with the carbs I bought but now I have to find a home for it. There was only one place left, behind the two carbs and resting on a welded up extension from the crankcase vent tank. I think I have been able to locate it correctly. First I had to find out the float level, meaning the level of fuel in the float chamber where the inlet valve closes to the inflow from the fuel tank. I got this established and punched a mark in the housing. Then I adjusted the float chamber height, relative to the main jet opening in the carb, by just stacking flat washers under the chamber until the correct height is reached.

Below you can see the float chamber to the very left.  I had to do two major modifications to make it fit. First I drilled through the bottom to allow for a 6 mm screw to go through it and to hold it to the bracket. Secondly I blocked the original threaded hole on top for the attaching rod. God thank you for Loctite!

Below is the business end to the set-up, showing from the left the float chamber, then the inlet bell mouths, the carburettor housings, the rubber adapters and then the inlet tracts designed by yours truly, ending up at the inlet ports of the cylinder head?  If this does not look like 80 hp then I don´t know what does?